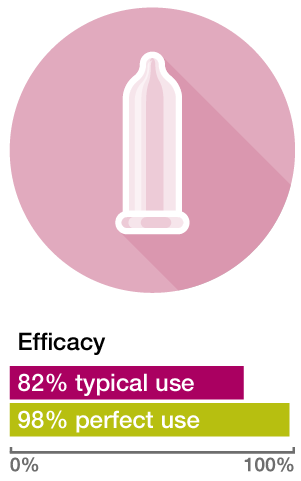 Cons
Susceptible to imperfect use and breakage. Some people are allergic to latex.

How do condoms work?

External condoms are placed on the penis, prior to sexual contact and create a barrier between the penis and vulva and vaginal canal; this means the sperm can’t get to the egg to fertilise it. They are made of either latex or polyurethane and ensures that any bacteria or infection on one person’s genitals stays there and doesn’t infect the other partner. Condoms are the single most reliable method of STI prevention available.

They come in a variety of shapes, sizes, colours, flavours and materials. Most supermarkets, chemists and convenience stores stock condoms. If you have a latex allergy, there are also varieties of non-latex condoms available.

With perfect use, a condom is 98% effective. However, while many of us might assume that we know how to use condoms correctly, there are a lot of ways you can use them imperfectly, such as not using a condom from the start and/or to completion of penetrative sex, not leaving a space at the receptacle tip and not using a water-based lubricant. All of this constitutes “typical” use, which brings the effectiveness down to just 82%.

So while condom use is crucial for preventing STIs, if you’re concerned about unplanned pregnancy you may want to consider a backup method of contraception.

Tip: Remember to use condoms with a silicone or water based lubricant. Oil based lubricant will compromise the condoms materials, and not using lubricant at all can greatly increase the risk of breakage.

How do I use a condom?

Condoms are easy to use, but you need to make sure you’re using them perfectly to keep you and your partner safe.

Step 1. Make sure your penis hasn’t touched your partner’s mouth or genital area before using a condom. Even brief contact with any of these areas can be enough to contract an STI, or to cause a pregnancy.

Step 2. Check the expiration date on your condom, and make sure it hasn’t been sitting around in a wallet, or in direct sunlight/heat for an extended period of time. Any of these things are enough to have compromised the integrity of the condom and rendered it unsafe for use.

Step 3. Unwrap the condom wrapper, but try to avoid using your teeth (we know, this can be difficult if you’ve got lubricant on your hands)! Often, when using teeth to open a condom packet, people can inadvertently tear the condom itself.

Step 4. Before putting the condom on, apply a generous amount of lubricant to either the tip of the penis, or the inside of the condom. Not only will this prevent the condom from ripping, it will also increase the amount of sensation you can feel.

Step 5. Look at the condom and before putting it on, make sure you have it the correct way up; the rim should be on the outside (it kind of looks like a little hat). If you start to put it on the wrong way and touch the wrong side to your penis, you need to throw it out and get a new one, because it’s possible that any pre-ejaculate containing sperm, or STI is now on the side of the condom that will be inside the other person.

Step 6. Pinch the tip of the condom and place it on the head of the penis. Make sure you leave a little room at the top for your ejaculate. If you’re uncircumcised, it might be more comfortable to pull your foreskin back before placing the condom on the tip of your penis and rolling it down.

Step 7. Roll the condom all the way down to the base of your penis. If this is the first time you’ve used condoms, now is a good time to assess the fit. Condoms come in a variety of sizes and making sure that it isn’t too loose or too tight is an important step in ensuring you’re using them perfectly. The wrong sized condom won’t just be uncomfortable, it’s also unsafe.

Step 8. Feel free to apply water or silicone based lubricant to the outside of the condom, or to your partner. This prevents the condom from ripping, and also makes sex feel even better! If you’re having oral sex, a good flavoured lubricant can help to mask the taste of the condom and will promote salivation, which will also reduce the risk of accidental tearing.

Step 10. Move away from your partner to remove the condom (so there’s no last minute spills on them) and throw the used condom in the rubbish bin. Don’t attempt to flush it down the toilet, as they can and do clog drains very easily.

Is there a specific way to put a Condom on?

Should I use two Condoms at once to double my protection?

Do I need to use Condoms if I’m on another form of birth control?