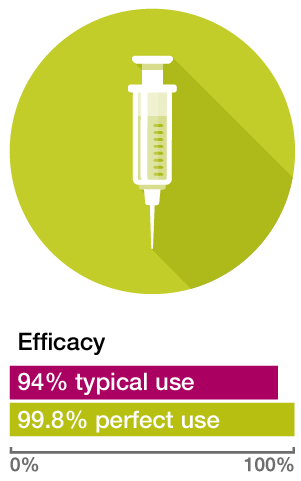 Cons
Some user action required, may cause side effects, requires a script, may be a delayed return to fertility for a few months (up to 18 months).

How does the Contraceptive Injection work?

Depot medroxyprogesterone acetate (DPMA) is a 150mg dose of the hormone progestogen. It works by preventing the ovaries from releasing an egg and thickens the cervical mucous, preventing sperm from accessing the uterus. Once you’ve had the Injection, it cannot be reversed. This means that if you experience negative side effects, you need to wait for it to wear off. It can also take up to 18 months for fertility levels to return to pre-injection levels.

Tip: Want to try depo, but scared of needles? Try listening to music through headphones before and during the injection; it helps keep your mind off the needle.

How do I use the Contraceptive Injection?

Step 1. Because the injection is a method of LARC, it doesn’t require you to do anything except show up regularly for injections by your doctor.

Step 2. Once you’ve had your shot, you can forget about it for the next 3 months, before you need to get another one.

Step 3. The efficacy of the injection relies on having the injections regularly, so make sure you schedule your follow up appointments in advance and set alerts to remind yourself.

How many people are using LARC in Australia?

I’m in an open/poly relationship, should I be using LARC?

Is it safe to use LARCs while breastfeeding?