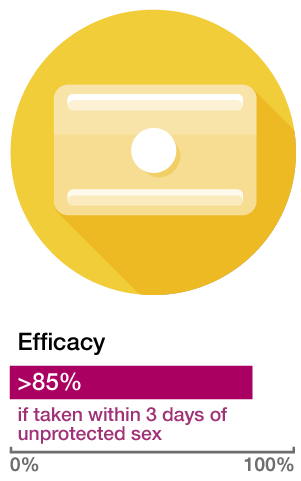 AKA
Morning After Pill, Plan B

Efficacy
>85% if taken within 3 days of unprotected sex

Cons
Doesn’t work if taken after ovulation, time sensitive, may disrupt menstrual cycle, can affect or be affected by taking hormonal contraception at the same time.

How do Emergency Contraception Pills work?

To be as effective as possible oral emergency contraception must be used as soon after the sexual act as possible. However you can use this method up to 5 days (120 hours) after unprotected sex, as long as you’re not breastfeeding. If you’re breastfeeding, you can still use this method but the only Emergency Contraceptive Pill you’ll be able to take and continue breastfeeding (not requiring you to express and discard milk) is only effective for up to 3 days (72 hours) after the sexual act.

Both types of morning after pill work by preventing or delaying your body from releasing an egg, which means any viable sperm will be out of your body by the time an egg is released. However, if you’ve already released an egg, Emergency Contraception Pills may not prevent a pregnancy.

Australia currently has highly limited availability of the 120 Emergency Contraception option, so it may be difficult to obtain.

Tip: There is also a third, non-hormonal option for emergency contraception – having a Copper IUD inserted within 5 days of having unprotected sex.

How do I use Emergency Contraception?

Step 1. After have unprotected sex, as soon as possible, make your way to a pharmacy and ask for emergency contraception.

Step 2. The pharmacist will provide you with the medication. Take it orally with water.

Step 3. Alternatively, make an appointment to have a Copper IUD inserted

How does the Copper IUD work?

Is it safe to use the Morning After Pill if I’m breastfeeding?

Is the Morning After Pill a type of abortion?